In this article, we will cover the most important Florida solar laws for people considering solar in the Sunshine State.

Luckily, in recent years, solar has grown tremendously in the state and we actually have some friendly state policies that incentivize and protect solar.

In addition to incentives, there are other legal considerations for solar in Florida. Some of the most confusing and also the most important are lien laws. These laws are very important for homeowners to understand before taking on any construction project. Lien laws vary state to state but you can be sure that your state has a version.

Finally, a common question when it comes to solar law in Florida is whether or not it is legal to go off-grid. We will answer this question at the end.

Floridians benefit from the federal investment tax credit (ITC) for solar which allows solar customers to receive tax credits of 26% of their contract price in 2020. However, this credit is phasing out and will disappear in a year and a half (January 2022) unless it is extended by Congress.

At a state level, we have two incentives for solar. First, solar in Florida is exempt from sales tax, which greatly reduces the cost. Second, solar in Florida is exempt from property tax, meaning that county tax collectors ignore your solar array when calculating your home’s value. These two incentives make solar very attractive when compared to other home improvement investments, which would be subject to both sales and property taxes.

Consumer Protections for Solar in Florida

The Florida Solar Rights Act is a property rights act that prevents HOAs and other governing bodies from enforcing rules that would prevent homeowners from getting solar panels. Under the Florida Solar Rights Act, HOAs can require approval before solar is installed. However, this approval cannot be dependent upon factors that would prevent the array from functioning. In other words, they can require approval, but they cannot deny homeowners permission to get solar. For instance, HOAs cannot mandate that solar panels be out-of-view if locations within view are the best locations for them to produce effectively.

Solar arrays are designed to produce more power than homes require while the sun is shining. This extra energy is traded to the utility for a credit that homeowners can use at night to get energy from the grid. This exchange is called net metering. Net metering is the key policy that allows residential solar to exist. Without it, businesses like Goldin Solar would struggle to exist. This is because net metering allows solar customers to replace their entire energy bill with solar even though the electricity powering their home is not coming directly from the solar array at all times. Net metering is generally protected at a state level, although municipal utilities such as JEA have chosen to severely limit or eliminate it for new customers. Net metering is constantly under threat from utilities despite its wide support from consumer groups and industry professionals.

Below is an illustration showing how net metering works: 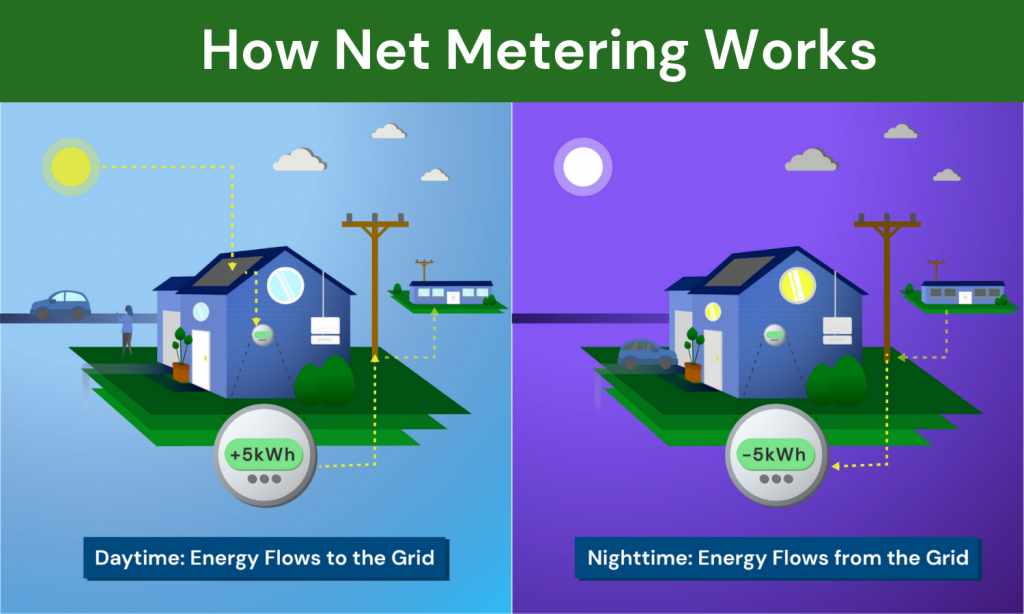 It is critical that homeowners understand Florida lien law before committing to a solar project. We include details about lien law in our contracts. We are required by law to include this notification about lien law in our contracts. We encourage homeowners to ask as many questions as they can think of about this section of the contract in advance so there is no confusion down the line.

By Florida law, solar contractors may file a lien on a home if payment is not received in accordance with the requirements of the contract. Contractors have 90 days to file a lien after the final work has been performed on the project.

Liens are not required to fulfill a project and are only filed if a customer does not meet their contractual obligations.

Is Off-Grid Legal in Florida?

Determining the legality of going off-grid with solar in Florida is not as simple as it might seem. The simplest answer is that no, it is not usually legal to be off-grid in Florida. However, this decision is mostly up to the local planning department. Some courts have ruled it illegal to go off-grid with solar in Florida, while some municipalities do not seem to care. Consult with your planning and permitting department before proceeding with an off-grid solar setup, even if a contractor has already offered to install one for you. Visit one of our FAQ to learn more about the relationship you will have with your utility when you go solar.